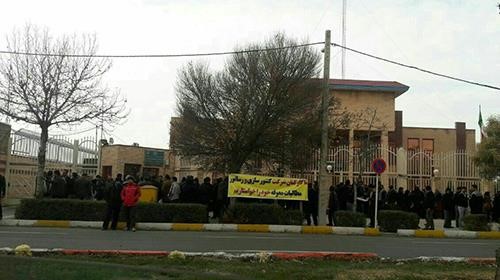 At 7:55 pm on Monday, December 5th armed state agents in Zahedan, southeast Iran, splashed acid on a 29-year old Baluchi man in southeast Iran, according to incoming reports. The armed agents intended to kill the young man, yet after failing to do so they resorted to such a horrific measure. This injured individual is currently hospitalized.

Active and retired workers in the cities of Ghazvin, Bushehr and Ahvaz staged rallies on Wednesday, December 7th.

On Wednesday morning a group of workers of the Alborz counter-making factory in the city of Ghazvin rallied in this city and protested their paychecks being delayed for the past 5 months.

In Bushher a number of protesting workers of the city’s third petrochemical site went on strike for the third consecutive day protesting their delayed paychecks and their insurances not being provided for.

Furthermore, hundreds of retired steel workers in Ahvaz rallied outside the retired workers’ office in the Kianpars district and demanded their pensions of the past two months.

A worker of the Hamedan water department in northwest Iran set himself ablaze outside the Bahar social security department, protesting his delayed paychecks.

Last week a deprived street vendor in Shiraz also set himself ablaze protesting severe poverty and the fact that state agents had confiscated his belongings.

Bahram Ghasemi, spokesman of the Iranian foreign ministry described the remarks made by British Prime Minister Theresa May at the Manama session as “uncalculated and divisive.”

“The goal in such remarks is to intensify the crises resulting from their war crimes against the innocent nations of Yemen, Syria, Bahrain, Iraq and other Islamic countries in the region,” he claimed.

May had on Wednesday attended a session of the Gulf Cooperation Council in Manama where she sought to ensure Gulf leaders that she is fully aware of the threats posed by Iran in the Persian Gulf and across the Middle East, adding through their partnership they must stand against Iran’s aggressive measures.