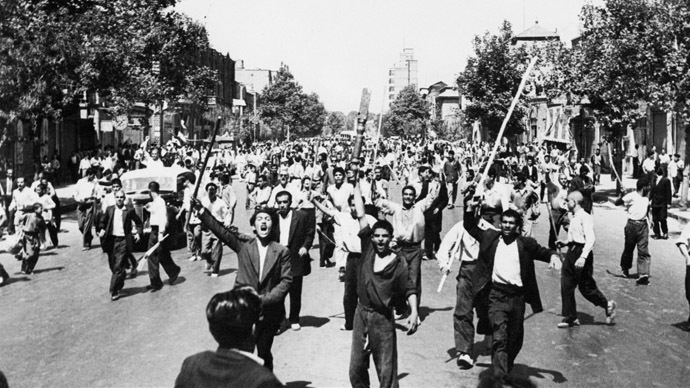 Let’s talk some history and how the regime ruling Iran manipulates facts. 66 years ago today, a coup d’état brought an end to Iran’s first democratically elected government of Dr. Mohammad Mosaddegh. All “elections” since have been nothing but a farce and should actually be described as “selections.”

Why do I say the mullahs’ regime “manipulates” history? This is what Iranian Foreign Minister Mohammad Javad Zarif tweeted last year on this day.

“65 years ago today, the US overthrew the popularly elected democrat government of Dr. Mossadegh, restoring the dictatorship & subjugating Iranians for the next 25 years. Now an ‘Action Group’ dreams of doing the same through pressure, misinformation & demagoguery. Never again.”

Zarif sought to portray an image of Iran’s mullahs (currently ruling the country) as a party opposing the 1953 coup d’état backed by foreign intelligence services who actually enjoyed support from Iran’s then mullahs.

Here are a few facts. The first coup attempt failed on August 16 of 1953. On August 19, a second attempt was launched by a number of influential mullahs and corrupt army officers. 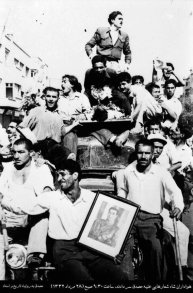 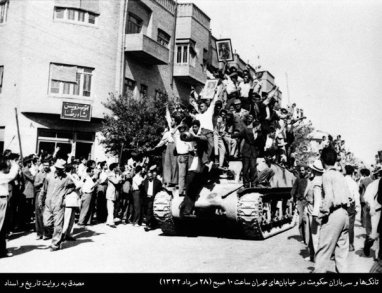 At 9:30 am of August 19, club-wielders supporting the ruling Shah began chanting slogans against Mosaddegh. At 10 am, the mob enjoyed the support of army tanks. This shows the role of the Shah’s corrupt army in the coup.

The mob went on to take over Tehran’s state radio building at 1:30 pm. The bloodiest attack targeted Mosaddegh’s home one hour later. The Shah’s supporters were seen parading dead bodies around the complex to instigate those inside the house. With bullets and tank shells barraging his home, Mosaddegh’s advisors begged him to leave the complex. Shortly afterwards, he was arrested by the mob. 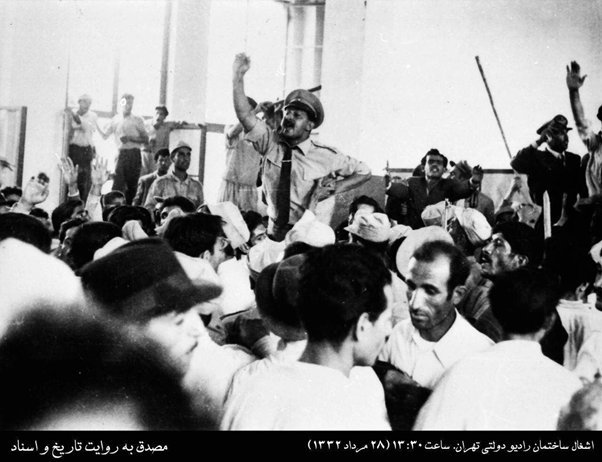 The “Bakhtar” daily office attacked by a mob of club-wielders supporting the Shah and backed by the country’s mullahs – Iran – August 19, 1953

Abol-Ghasem Kashani, an influential mullah in Iran at the time who helped topple Mosaddegh and facilitated the Shah’s return to power.

Others have also been very suspicious of the mullahs’ role in the 1953 coup.

“The clergy had always been averse to the modernizing penchants of secular politicians such as Mossadeq and their quests for republican rule and liberalization. The mullahs much preferred the deference of the conservative, if vacillating, shah to the secular enterprise of Mossadeq. After the attempted coup, the esteemed men of religion in Qom gave their tacit endorsement to the speaker of Parliament, Ayatollah Kashani. Through their connections with the bazaar and their ability to galvanize the populace, they were instrumental in orchestrating the demonstrations that engulfed Tehran. Mossadeq was already isolated. As the street protests tilted toward the shah, the military stepped in and displaced Mossadeq,” according to an article written by Ray Takeyh, a senior fellow at the Council on Foreign Relations.

Unveiled document shows how the Shah of Iran paid a senior mullah and other operatives who carried out the coup against Mosaddegh’s government.

Among the documents provided by Ardeshir Zahedi, the Shah’s last Ambassador to the U.S., we see a hand-written note reading:

(Note: This might have been written by Ardeshir’s father, Gen. Fazlollah Zahedi.)

“[Kashani] then met several times with Fazlollah Zahedi, who had been approached by the British as a possiblecandidate for anti-Mosaddeq activity, and encouraged Zahedi to work against Mosaddeq.  U.S. officials received reports in this period that Kashani also met with Tudeh leaders, who agreed to help him replace Mosaddeq and work against U.S. influence in Iran.  Several other key members of the coalition also turned against Mosaddeq, including Hossein Makki, Abol Hassan Haerizadeh, and Mozaffar Baqa’i, who headed the pro-labor, anti-communist Toilers (Zahmatkeshan) Party.  U.S. officials were very alarmed by these events, viewing them as evidence that Mosaddeq was losing control over the situation.  They were especially concerned about the growing strength and independence of Kashani, who they believed was hostile to Western interests and more willing than Mosaddeq to tolerate the Tudeh,” wrote Mark J. Gasiorowski in his book, “The 1953 Coup d’État Against Mosaddeq.” Tudeh was a communist party in Iran supported by the then Soviet Union.

These facts prove Zarif’s hypocrisy of claiming to defend Mosaddegh while accusing the U.S. of misinformation and demagoguery. These are the same accusations raised by Iranians against the mullahs’ regime for 40 years now.

In conclusion, the 1953 coup d’état in Iran – facilitated by the mullahs in Iran – paved the path for another 25 years of dictatorship for the Iranian people under the Shah’s rule. In 1979, in another blow to the Iranian people, the mullahs hijacked the nation’s revolution, allowing the emergence of religious tyranny and the rise of Islamic fundamentalism that has been wreaking havoc in Iran and across the Middle East for the past four decades.

If the mullahs had not facilitated the 1953 coup d’état and the Shah’s return to power, democracy would have had the chance to flourish in Iran. This was never in the mullahs’ interest as they sought grounds to establish their own reign in Iran.

Therefore, the solution lies in the mullahs’ rule coming to an end through a democratic revolution. There is no need for a repeat of Afghanistan, Iraq or Syria. Iranians just ask the international community, especially Europe, to not support Iran’s mullahs in any way and we will take care of the rest.

There’s no need for a single soldier to be sent to Iran, not a single bullet fired, nor a single dollar spent. The world should stand shoulder to shoulder with the Iranian people in this struggle by ending all political and economic relations with the mullahs’ regime.