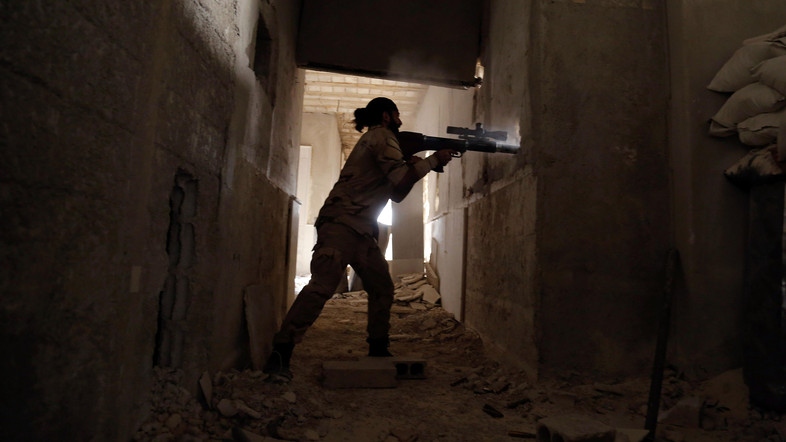 As the world continues to fail in stopping the bloodshed of innocent people in Syria, Iran seeks two main objectives of saving face back home & raising the price any possible deal in the future that is becoming more and more likely now.

The Assad regime is continuously bombing innocent people in Eastern Ghouta near Damascus, killing at least 500. Rescue workers are continuously pulling dead civilians from the rubble. As the United Nations Security Council has adopted a 30-day ceasefire resolution, it has become crystal clear that strong actions need to back-up such demands.

As the killings are appalling, we must keep in mind how Tehran is the driving force to maintain Syria as part of a dreamed Shiite-Persian empire. Iran continues to expand its foothold in Syria, while Arab countries across the Gulf, Germany and France are also being heard making strong demands. The European Union as a whole should also be making Iran understand such hostilities are unacceptable.

Talking about the Syrian crisis, TRUMP just offered one of the harshest critiques of RUSSIA that I've ever seen from him: "What Russia and what Iran and what Syria have done recently is a humanitarian disgrace. …What those three countries have done to people… is a disgrace."

Ever since the Assad waged war on the Syrian people back in 2011 Iran has placed its entire weight behind his dictatorship, and pleading Russia’s air support in 2015 to ensure the regime’s survival, knowing its own rule would be threatened in the case of losing Damascus.

Following the fall of Aleppo and ISIS being routed from Raqqa, and especially after enjoying Obama’s appeasement approach, this Tehran-Moscow-Damascus axis now has its crosshairs focused on the Syrian opposition’s remaining strongholds.

This alliance will thus seek to re-establish Assad’s control over Syria through Russia-sponsored peace, degrading an already weak UN-backed effort in this regard. Russia will demand to maintain its military bases, and Iran seeks to achieve its long desire of establishing meaningful influence across the region to the Mediterranean.

As widely reported, in areas now controlled by Assad, Iran is in the effort of establishing a lasting military presence for the Islamic Revolutionary Guard Corps (IRGC), the Lebanese Hezbollah, hired mercenaries from Pakistan, Iraq and Afghanistan, and local Syrian proxies.

US National Security Adviser H.R. McMaster expressed concerns back in December about “the prospect of Iran having a proxy army.” Estimates indicate Hezbollah building an armada of 100,000 rockets based in Lebanon and possibly Syria. Such an Iranian fortification in Syria bears the potential of another Middle East war, although Tehran will most definitely back down knowing its apparatus lacks such a capacity. 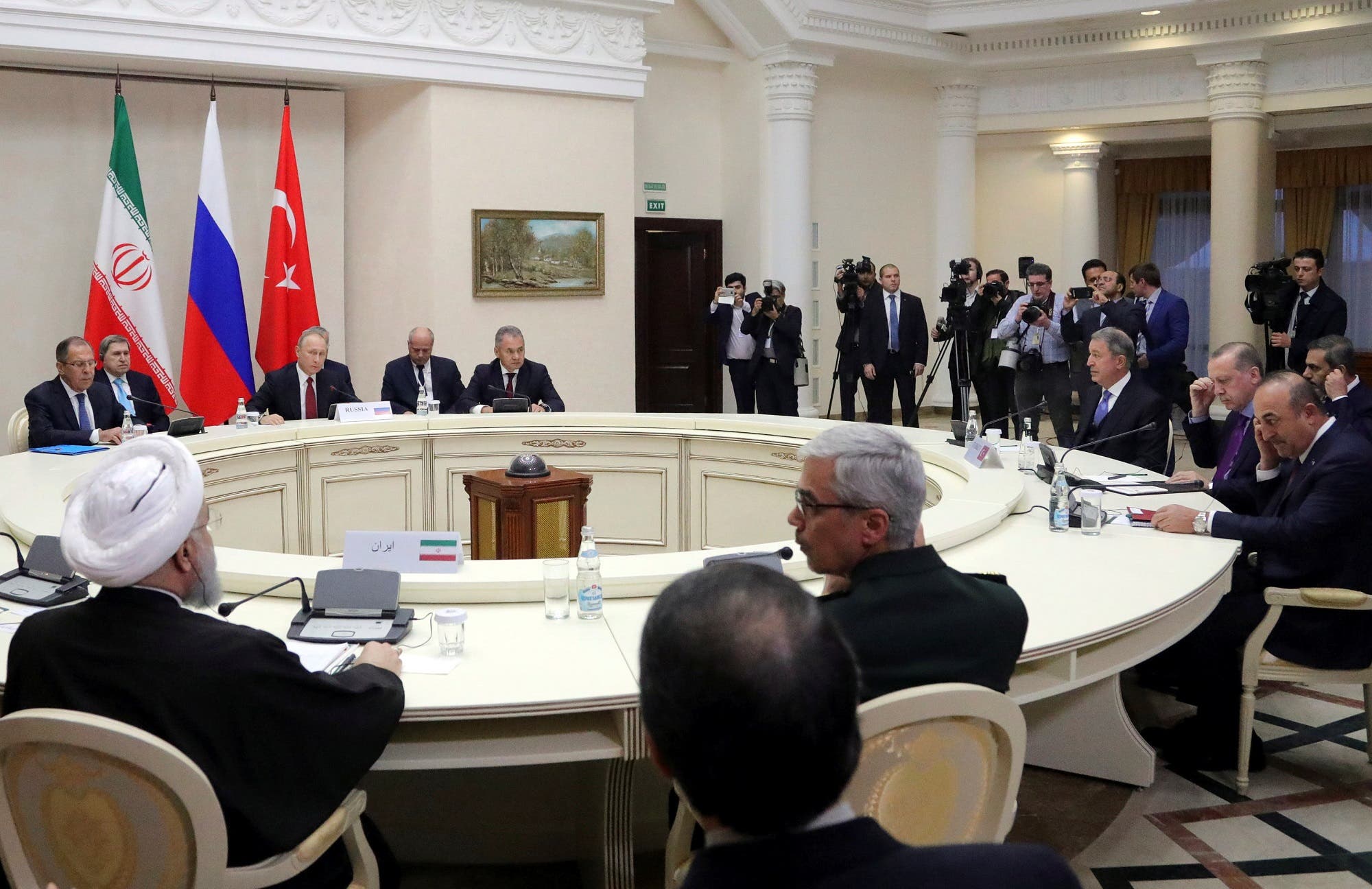 While Iran may publicly boast the ultimate goal of seeking “the eradication of Israel,” as the leader of the IRGC’s Quds Force, Qasem Soleimani, said recently, its main intention is twofold.

Tehran’s need for growing belligerence abroad is increasing as recent protests flare at home. Earlier this month tensions sparked across the region as the Israeli military shot down a drone launched by Iran-backed forces from the Syrian city of Homs. Fighter jets were also deployed to target the base controlling the drone, parallel to other military targets.

Talking about the Syrian crisis, TRUMP just offered one of the harshest critiques of RUSSIA that I've ever seen from him: "What Russia and what Iran and what Syria have done recently is a humanitarian disgrace. …What those three countries have done to people… is a disgrace."

This escalation in provocation stems from Iran’s mentality of showing a strong stance abroad to maintain influence among an already dwindling social base at home. Today’s circumstances are forcing Iranian Supreme Leader Ali Khamenei to publicly admit people are criticizing the ruling state and his position.

At such an extraordinary situation for Iran’s clerics, boasting a powerful position abroad against foreign enemies also provides a pretext for Tehran to quell domestic dissent.

WATCH: Enough is enough, #Iran has to abide by international laws if it wants to be treated as a normal country pic.twitter.com/fc3cf1cCJf

For Iran it is highly important how the global community responds to its bellicosity, understanding when is the time to dial down and when the timing is proper to further hostilities.

Saudi Foreign Minister Adel al-Jubeir in a European Parliament speech emphasized the necessity for global collaboration to prevent Iran’s interference abroad, adding Tehran should end its efforts and the “revolution is over.” Across the Atlantic, US Vice President Mike Pence reiterated the fact that Tehran remains the main state supporter of terrorism, warning Washington will no longer tolerate Iran’s destabilizing activities across the region.

And returning from his Middle East tour, Ed Royce, Chairman of the US House Foreign Affairs Committee issued a statement emphasizing the threat Iran poses for the entire region. Financial and diplomatic measures against Iran’s missile program and its support for terrorism were discussed in his meetings, according to a statement.

Moving back to the Green Continent, German Chancellor Angela Merkel has called on the European Union to increase pressure on Russia and Iran to end Syria’s violence. Merkel enjoys the opportunity and influence to lead Europe into putting aside its appeasement policy vis-à-vis Iran and stand on the right side of history.

Understanding the situation at hand, Iran is raising the price in Syria – such as the horrendous bombing campaign of East Ghouta – to use as a lever in possible future talks over its ballistic missile program and meddling in other states’ internal affairs.

#UN Security Council expected to approve on Monday a British-drafted U.N. resolution that would condemn #Iran for violating a U.N. arms embargo by providing missiles and drones to Shiite rebels in #Yemen — and commit to future action against #Tehran https://t.co/QXRuZa54zx pic.twitter.com/liSvg4TiSX

The international community, and especially the European Union, should be concerned over the Middle East experiencing a new wave of dangerous tension. US President Donald Trump promised last October to counter Iran’s “destabilizing activity and support for terrorist proxies in the region.”

It is high time to realize how Iran needs to escalate the stakes in Syria to both continue quelling dissent at home and renew saber-rattling for its correspondents.

The answer lies in supporting the Iranian people’s uprising against the ruling clerics and significantly elevating the price of Tehran’s destructive role outside its borders by threatening a return of crippling sanctions targeting the regime’s entities.