Discussions are continuing as we speak over the fate of the highly controversial Iran nuclear deal, formally known as the Joint Comprehensive Plan of Action (JCPOA).

Advocates and opponents are going the limits to present their case prior to the October 15thdeadline when US President Donald Trump is due to determine the status of Iran’s compliance with the accord.

While this is a very important discussion, what unfortunately goes neglected is the status of the Iranian people who should be the first beneficiaries of such an accord that led to many sanctions being lifted from the Iranian regime.

The ruling elite in Tehran have usurped the billions provided by the Obama administration in cash, waivers and sanctions reliefs to boost their ballistic missile program in violation of UN Security Council resolutions, prop up the Assad regime in Syria and its continuous killings of innocent people, and escalate their lethal meddling across the Middle East, including Iraq, Yemen, Lebanon, Kuwait and Bahrain.

The Iranian people, however, have yet to witness any improvements in their lives. Recently many cities across the country have been the scene of widespread rallies staged by hundreds, and at times thousands of people protesting how their investments in state institutions have been plundered.

For four years financial firms such as the Caspian Credit Institution, reported to be affiliated to the Revolutionary Guards (IRGC), and various branches of the government have received enormous amounts of money from ordinary people looking to invest in such entities what is literally considered their life savings, according to the Iranian opposition National Council of Resistance of Iran (NCRI).

Viewed as a safe investment in other countries, with people placing their money in government institutes and not private companies, investing in such entities has become a nightmare in Iran.

Even the country’s Central Bank has refused to clarify if such financial institutes are actually legal or illegal in nature. Credit firms such as Afzal Tous, Thamen, the Mehr Bank and Arman firm have all opened branches and invited investors to place in their savings, and yet no signs of such names are registered in the Central Bank’s accounts. Millions are said to be investing in these financial firms.

450,000 people who have invested their savings in the Fereshtegan Credit Firm, linked to Caspian, are now complaining how a total of $1.4 billion of their savings have vanished, reports indicate.

Investors had already placed around $2.26 billion in eight trade institutions prior to their dissolve that preluded the formation of the Caspian firm in 2015, the report adds.

Officials of these institutions in Iran are allegedly affiliated to the IRGC and other regime entities, including allegations of the state police issuing registration forms for up to 5,000 such credit institutions.

Many people have felt their trust has been misused and literally stabbed in the back, as their life savings have vanished in thin air. 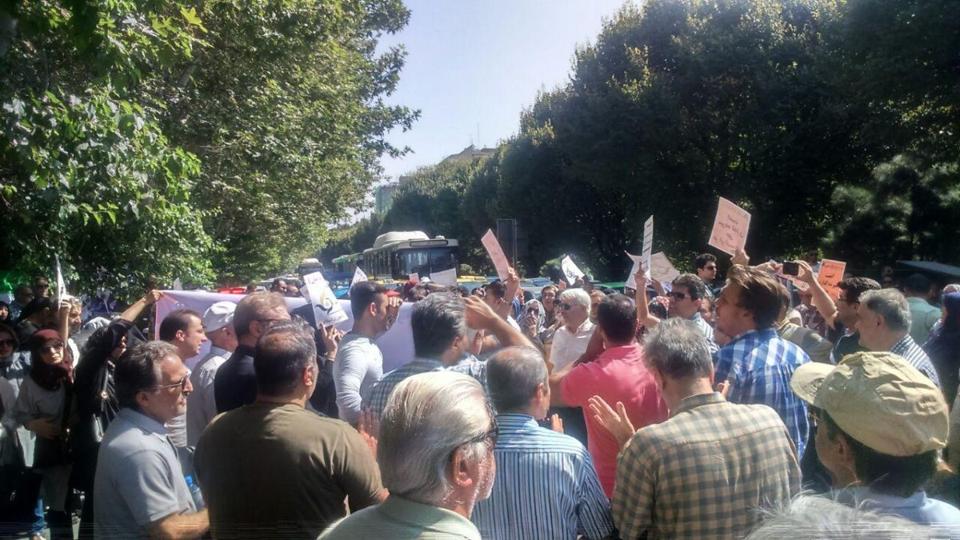 This has resulted in numerous protest rallies in major cities such as Tehran, Mashhad, Isfahan, Rasht, Kerman, Karaj, Kermanshah, Yazd and Khorramabad, among others.

Protesters in the Iranian capital have rallied outside the regime’s judiciary building, with reports indicating such gatherings continuing. Statements issued by these protesters show they intend to extend their gatherings until further notice.

As reports escalate regarding Iran allocating billions to prop the Assad regime in Syria, protesters are seen chanting: “Forget Syria, start thinking about us!” and “Rouhani, Rouhani, this is the last warning, we are fire at will!” referring to a term used a few months ago by Iranian Supreme Leader Ali Khamenei against presumed enemies of the state.

In the city of Kerman, southcentral Iran, these protesters in a symbolic gesture laid an empty table cloth to portray their current living status after their savings have been plundered.

Many investors who have lost their savings believe the issue is not just about money, as this has become very deep and involves their very dignity.

Conditions have reached a point where the chairman of the Iranian Parliament’s Economy Commission said there are around 15,000 charity institutions registered in Iran while around half are involved in non-transparent activities considering they do not publish their financial statistics.

Iran’s bankrupt economy is symbolized in as many as 11 million people living under the poverty line, according to the head of Iran’s Khomeini Relief Foundation.

A country with 15,000 charity institutions and a financial turnover estimate of around $10.5 billion, there should not be such an astonishing number of people living in utter poverty.

Considering Iran’s non-transparent regime and economy, this is merely a tip of the iceberg of the enormous economic crisis brewing in this country with a powder keg populace.

This major socio-economic crisis in Iran is evolving as the regime continues to expand budgets allocated for its military and regional forays, and entities involved in imposing a fierce atmosphere of domestic crackdown.

Billions are used to seal deals to purchase planes from Airbus and Boeing, while numerous reports show Iran being notorious for using passenger planes to transfer foot-soldiers, arms and equipment for war machines across the region, especially Syria.

Vital is the fact to impose sanctions on the regime ruling Iran and go the distance in refraining to impose any pressure on the Iranian people. If Iran’s nuclear-related sanctions are relieved under the JCPOA, more measures are needed to ensure the money pouring into Iran are used for the better interest of the Iranian people, and not the regime’s war machine abroad.

Javad Mansouri, the first IRGC commander and a former Iranian ambassador to Pakistan said four years ago, “Even if it rains gold… there will be no change in the status quo. Don’t go thinking all problems will be solved if Mr. Zarif signs the [JCPOA] tomorrow…”