The pro-Iran deal camp is recently making much noise about how the Trump administration and critics of the pact, known as the Joint Comprehensive Plan of Action (JCPOA), are making rightful complaints of the text failing to address Iran’s destructive belligerence in the Middle East.

These are valid concerns, considering the fact that even if the deal remains intact come October’s decision by President Donald Trump to find Iran in compliance or not, the mullahs are hell-bent to continue wreaking havoc and expanding influence across the region.

The pro-Iran deal camp claim Washington has no evidence to hold Tehran in violation of the JCPOA terms. Not true.

The pro-JCPOA camp also argues this deal has prevented Iran from becoming the next North Korea. This is partially true and misleads only the uninformed reader. A deal very similar to the JCPOA, led by the Clinton administration, was signed with North Korea and ended up in dismal failure. This left the world with a rogue state now equipped with at least 20 nuclear bombs, intercontinental ballistic missiles and the technology to miniaturize a nuclear warhead in its payload.

While the JCPOA was intended to keep Iran away from nuclear weapons, why shouldn’t Washington lead the West in demanding Iran curb its further belligerence, such as advances in its ballistic missile drive, increasing executions and atrocious human rights violations, and stirring mayhem in the Middle East?

In #Iran, #Baha’is, #Christians and other minorities are persecuted for their faith. https://t.co/HTgFDOkJBB 2/

Iran must be held responsible for “its missile launches, support for terrorism, disregard for human rights, and violations of U.N. Security Council resolutions,” U.S. Ambassador to the U.N. Nikki Haley said Tuesday.

Speaking of this flashpoint region, legitimate concerns exist over Iran establishing a “Shiite crescent” stretching from Afghanistan to the Mediterranean. Important to note is the fact that JCPOA flaws, and the Obama administration’s desperate nature to sign a deal as a foreign policy legacy, provided Iran a windfall of billions to stoke its support for the Assad regime in Syria.

“Iran has been helpful in Iraq by fighting the Islamic State,” is how The New York Times describes Tehran’s campaign in its western neighbor, failing to even mention how Iran-backed Shiite militias and death squads have launched massacres, killing sprees and forced displacements targeting Iraq’s Sunnis and other minorities. While Iraq was a melting pot of peoples of different backgrounds living intertwined in peace and for centuries, Iran’s fueling of sectarian wars has created a dangerously wide rift of hatred.

Iran’s measures in supporting Yemen’s Houthis in their illegitimate fight against an internationally recognized government, funding of the Lebanese Hezbollah and supporting the Afghan Taliban as an ally against the US add all the more reason for strong action against Tehran.

In parallel fashion, the pro-appeasement camp continues to seek ties between Washington and Tehran, similar to the “working relationship” established between former US top diplomat John Kerry and his Iranian counterpart Mohammad Javad Zarif.

Iran apologists are quick to criticize current US Secretary of State Rex Tillerson for refusing to meet Iranians, while easily brushing aside the undeniable truth that Tehran usurped its warmed relations with the Obama administration to concurrently prop up the Assad regime and its massacring of innocent Syrian women and children, especially with chemical weapons.

Another question Iran apologists have allowed Tehran to go by never answering is this: Why do the mullahs continuously insist on such a politically and economically expensive nuclear program while sitting on the world’s second largest natural gas reserve and fourth largest crude oil reserve?

If the mullahs truly sought the better interest of the “Iranian nation,” as they have claimed for the past forty years, why don’t they turn off the lights on their nuclear program and reap in all the incentives and lucrative economic contracts that will most definitely follow?

And why the sudden regime change-phobia on Iran? Yes, many critics correctly point out the fact that regime change policies in Afghanistan, Iraq and Libya have gone south. Yet why do these critics fail to go the distance and carefully evaluate the main reason behind these failures?

Afghanistan, Iraq and Libya lacked any solution and alternative to replace their ruling states with true democracies. This is not the case with Iran.

The Iranian opposition National Council of Resistance of Iran (NCRI), a coalition of numerous dissident groups and individuals, led by its charismatic President Maryam Rajavi, has a ten-point plan for the future of Iran.

Universal suffrage, pluralism, individual freedoms, abolition of the death penalty, separation of church state, gender equality, rule of law, commitment to the Universal Declaration of Human Rights, peaceful coexistence and a non-nuclear Iran all meet the modern democracies in the West.

The NCRI, with the People’s Mojahedin Organization of Iran (PMOI/MEK) as its core member, has been gaining serious momentum in the past few months. Senator John McCain, Chairman of the US Senate Armed Services Committee met with NCRI President Rajavi in April. Last month hundreds of international dignitaries and over 100,000 members of the Iranian Diaspora voiced support for regime change in Iran in a massive Paris rally.

And as the Trump administration is weighing its comprehensive Iran policy, a high-profile delegation of US senators recently visited Maryam Rajavi and PMOI/MEK members in Albania. This visit sends strong signals as Rajavi and the PMOI/MEK are the legitimate flagbearers of regime change in Tehran. 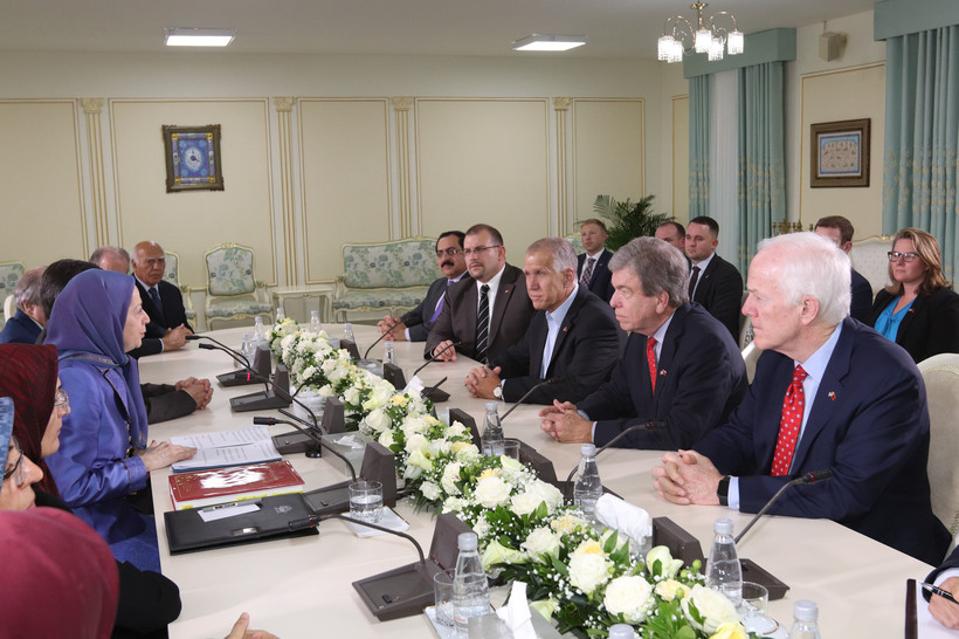 At such a sensitive timing, Tehran is on its last leg and Iran apologists are desperately attempting to provide a crutch. This is a highly mistaken approach.

Washington should lead the West in raising the stakes for Iran. Demands must be placed before the mullahs to end all its menacing activities, parallel to the international recognition of the Iranian opposition NCRI to realize regime change in Tehran.