Where are we now? Has Iran changed for the better? Or has Tehran taken advantage of the Obama administration’s concessions to further advance their domestic crackdown, foreign meddling and nuclear/ballistic missile programs?

We are now at a crucial juncture. The Trump administration is currently weighing all options, including regime change, in their evaluation of a comprehensive Iran policy. As wars in various countries and appeasement with Iran have all proved disastrous, regime change by supporting the Iranian people and their organized opposition is the best viable option.

The pro-deal camp described Iranian President Hassan Rouhani as a “reformist” and decided to neglect the massive wave of executions launched during his first tenure. The Iran nuclear deal gave a green light to Tehran, leading to over 3,000 executions during Rouhani’s first term as president.

Despite all the naive expectations in Rouhani’s second term, there are reports of increasing executions. This month alone 57 prisoners have been sent to the gallows. 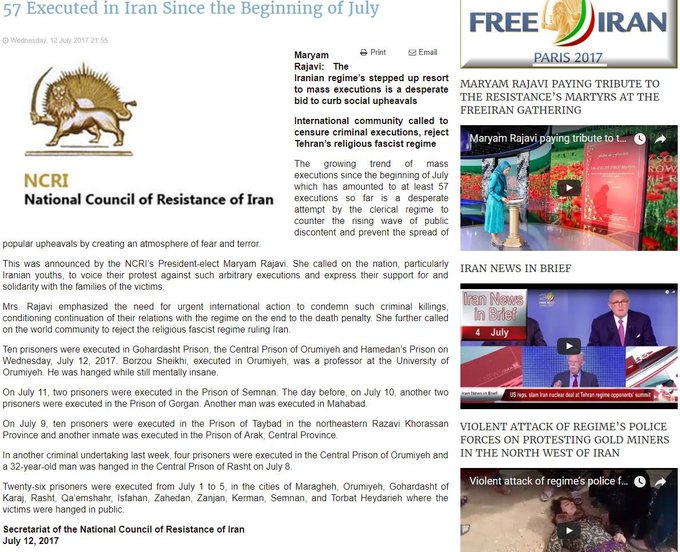 The regime in Iran is fearing a repeat of widespread protests mirroring those seen rocking its very pillars back in 2009. In response, Iranian regime security forces are seen raiding homes of a long slate of political and human rights activists in Iran, most specifically those supporting the main opposition group, People’s Mojahedin Organization of Iran (PMOI/MEK).

This YouTube video shows a brave Iranian activists declaring “My Vote is Regime Change” on May 19th when the regime held its elections.

Rest assured Iran will ramp up its domestic crackdown as rifts in its senior hierarchy continue to deepen. To add insult to Iran’s injury, US Secretary of State Rex Tillerson mentioned his support for regime change through backing domestic opposition at a June 14th congressional hearing.

Looking abroad, Iran took advantage of the nuclear deal to first convince Russia to launch its Syria campaign in September 2015 and provide the air support needed to help prop up the Bashar Assad dictatorship. Prolonged death and destruction resulted as Syria is bearing nearly half a million dead and over 12 million internally and externally displaced.

Iraq has also seen the wrath of Iran’s foreign intervention. Under the pretext of the fight against ISIS and the US-led coalition providing air coverage, Tehran’s proxies are literally changing the social fabric of Iraq’s Sunni provinces.

ISIS may have been defeated in Iraq, but the battle to establish stability and true Iraqi sovereignty has only just begun. Iran’s influence runs deep in this country despite the US spending $3 trillion of its resources, and thanks to Obama’s premature troop departure handing over Baghdad to Tehran in a silver plate.

Yemen and Iran’s support for the Houthi proxies is no better story. As Obama focused solely on preserving his legacy-defining nuclear deal with Iran, the mullahs continued to support the Houthis financially, logistically and with crucial arms supplies. The country will not see peace unless a strong will is adopted to end Tehran’s deadly involvement.

Iran’s mullahs have also been fast advancing their ballistic missile program, all in defiance of UN Security Council resolutions. Knowing the Obama administration would fail in taking any punishing actions, Tehran carried out numerous test launches after the Iran nuclear deal signing and continued to do so after Obama left office.

The Trump administration has slapped three rounds of sanctions against Iran. In one instance Tehran cancelled plans for one missile test launch. The mullahs need these test launches to maintain face and curb many internal issues amongst its already dwindling social base.

Moreover, Tehran’s ballistic missiles have become a leverage to threaten the Middle East. As North Korea continues its ballistic missile advances, a possible trade between Pyongyang and Tehran could be devastating for future regional stability and possibly even world peace.

“And it’s clear that the regime’s behavior is only getting worse. Their continued violations of the agreement; their work with North Korea on nuclear weapons and ballistic missiles only continues to grow… North Korea is already perilously close to the point where they can miniaturize a nuclear weapon, put it on an intercontinental ballistic missile and hit targets in the United States. And the day after North Korea has that capability, the regime in Tehran will have it as well simply by signing a check,” said John Bolton, former US ambassador to the UN at a recent Iranian opposition rally in Paris.

Reports also indicate Iran is continuing to focus activities with the objective of obtaining nuclear weapons.

In a recent publication the state of Hamburg in Germany reports “there is no evidence of a complete about-face in Iran’s atomic polices in 2016” [after the Islamic Republic signed the JCPOA deal with Western powers in 2015, aimed at restricting Tehran’s nuclear program in exchange for sanctions relief]. Iran sought missile carrier technology necessary for its rocket program.”

For the road ahead, the Trump administration should adopt a firm policy of first inflicting the true nature of strict measures implemented in the JCPOA, especially the tough inspections of all facilities and holding Tehran in violation without any reservation.

GOP Senators have made a call on President Trump to find Iran in non-compliance with the nuclear accord. Tehran has enjoyed far too much time to cheat its way around the deal and Washington should bring an end to this.

Targeting the core entity responsible for these measures is key. Iran’s Revolutionary Guard is involved in domestic crackdown, foreign meddling and the mullahs’ nuclear weapons and ballistic missile programs. To this end, designating this entity as a foreign terrorist organization is long overdue.

Finally, the Trump administration should lead the international community to first bring an end to the highly flawed appeasement policy with Iran. This will lead to the world standing alongside the Iranian people and their organized opposition movement, symbolized in the National Council of Resistance of Iran, in bringing about true change in order to establish freedom, democracy and a non-nuclear Iran peacefully coexisting with all its neighboring countries.