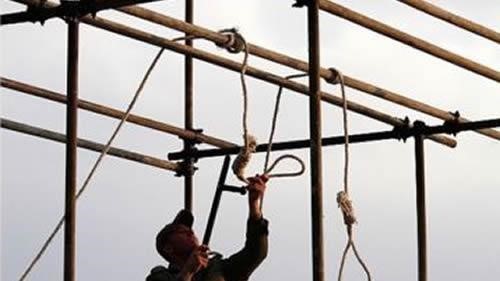 A prisoner by the name of Ali Akbar Karami was executed on Tuesday, December 6th at Kermanshah’s Diesel Abad Prison in western Iran.

This inmate, from the city of Kangavar, had been held behind bars since 2013.

The mullahs’ regime in Iran hanged a prisoner in the early morning hours of Wednesday, December 7th in Salmas Prison, located in northwest Iran. The inmate’s name was Ali Chartagh.

The death sentence for this prisoner was carried out while his case had been appealed at the regime’s supreme court.

“My brother was innocent and they convicted him based on confessions obtained by force. However, according to those very confessions, he should have received a lower sentence, such as life in prison,” the inmate’s brother said.

Suicide rates increase due to poverty

A student in his third year at Chabahar Maritime and Marine University in southern Iran committed suicide early Wednesday morning in the college dormitory.

College officials have said they are not aware of the motive behind this suicide.

Unfortunately, suicide rates in Iran are increasing day by day. Poverty and enormous pressures imposed by the mullahs’ rule are the increasing reason behind this phenomenon, making it an epidemic.

On Monday, an inmate in Gohardasht Prison of Karaj, west of Tehran, committed suicide due to the inhumane pressures imposed prison authorities.

An individual committed suicide outside the regime’s prosecutor’s office in Tabriz, northwest Iran.

In Urmia, northwest Iran, a mid-aged man threw himself off a 10-story building and lost his life on his way to the hospital. This incident took place on November 30th.

A 14-year-old girl in Momaseni committed suicide on Tuesday, November 29th by shooting herself.

Suicide rates in Iran under the mullahs’ rule have increased. These cases are only a tip of the iceberg of the actual number of suicides due to poverty.

50 members of Iran’s paramilitary Bassij members have been killed in Syria, said Gudarzi, head of this organization’s college branch, during a speech on Tuesday, December 6th.

They were dispatched from the “College Bassij Organization” to Syria, he said.

It is worth noting that the Secretariat of the National Council of Resistance of Iran issued a statement on November 29th citing reports obtained by the Iranian opposition from inside the country stating over 10,000 members of the Revolutionary Guards and their foot-soldiers from Lebanon, Afghanistan, Pakistan, Iraq and other countries have been killed in Syria.

Based on reports from inside the IRGC most of the bodies of Afghan, Pakistani and Iraqi mercenaries killed in Syria are not returned to Iran to prevent any social unrest in this regard.

According to reports received from inside Iran, on Tuesday, December 6th as universities marked Students Day across the country, a student disrupted a speech being delivered by Iranian deputy parliament speaker Ali Mottahari at Tehran Polytechnic University.

“Mr. Mottahari, we will be condemned by history as we remained silent in the face of what is taking place in Syria and the massacre of its innocent people,” he said.

Other students welcomed these remarks.